Murano is located 1.5 km from Venice and is the largest of the islands in the lagoon. The area was already settled in roman times.

Residents Altinums found here repair during the lombard invasions and baptized the island of Ammurianum, like one of the gates of her old city.

People from Oderzo also joined them.
In7th/8th century, the port of the island, Sant’Erasmo, was a significant intermediate port of maritime trade.

Since the 10th century, Murano was a commercial centre; the production of salt pans, the water mills and fishing made for growing economic importance.
The population density was so that already in the 9th century a Doge had to moove the inhabitants of the island in Venice, in the district of Dorsoduro.
From the 13th century on, the island was the jurisdiction of a Podestà, who was choosen from the venetian nobility.
Nevertheless, Murano had a own great and little council, and was following his own laws rules.
To these institutions were offices added like a Camerlengo, the respansable of the treasurer and the Nuncio, the ambassador in Venice, who took care of shops around the city of the island.
Murano possessed like Venice the privilege to produce his own silver and gold coins.

At the end of the 13th century, the island specialized on glass production. On 1291 all glass blowers of venice were invited to leave the city and to set up in Murano, it was a precautionary measure against the danger of firefor the wooden housesin Venice.
The trade in glass has now experienced such an upturn, that Murano from the 15th to the end of the 17th century, gained the primacy europe.
In this heyday the island was also a place of summer cooling.
Noble venetians settled here their country houses, built magnificent palaces in the midst of wonderful gardens.

The landscape of Murano

The island kept almost through all the centuries her face. So there was in the small town still at the end of the18th century more channels than roads more gardens than buildings.
There are 17 churches, several monasteries, several dozen palaces and beautiful homes, only in a narrow strip of buildings formed along the channels.
But in the 19th century the urban structure changed. A most of the buildings were demolished, they began to build in the pleasure gardens.
Two bays were filled to create new residential areas (Sacca Serenella and sacca san Matteo). 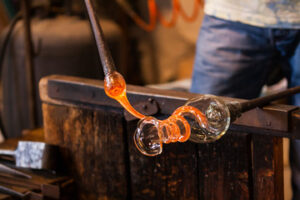 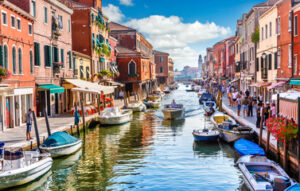 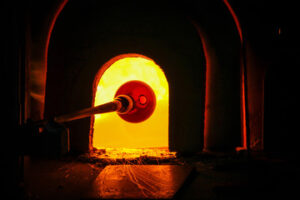 It seems that glass production in the lagoon started very early: during excavation they have found rests from roman times.
At the end of the 10th century began glass fabrication in Venice.
The glass blowers soon joined together in a guild.
In 1291 the craftsmen had to move to Murano.

Glass as an export hit

Already in the middle of the 14th century the glass blowers of Murano started to sell their goods abroad.
They were known for the coveted glass pearls and by the since the 15th century for the mirrors, exported in large quantities.
Half a century later they no longer produced only utilitarian objects, but created an independent art.

In15th and 16th century, the glass blowers mainly tryied to work with different materials.
They export the dark colored emailglas although in Venice was out of fashion.
Then the production of crystal glass, no real crystal, but a particularly clear, transparent glass.
It was invented the aventurine-glass and glasses with golds peckled, the calcedonio glass which was as hard as stones.
The very old technique of millefiori was rediscovered, worked with chopsticks from stained glass in transparent glass.
More and more items were produced:from Lattimo, a matte frosted glass, and from Latticino, an artful connection made of Lattimo and clear glass.
At that time the venetians reached fine quality that made it famous.

Guild regulations of the glassblowers

In view of the growing importance of the glass industry, the craftsmen were given great legien, but were also a strict political control.
In contrast to other european country was not necessary to choose from a glass-blower family to bring it to something in this art.
A simple apprentice could improove his skills learning form a glass-blowing master. However, it was forbidden to the glass blowers to emigrate.
When they left Murano, their goods were confiscated, it even occurred that the Serenissima hired some murderer to kill them.
Nevertheless, the north of Europe flourishing businesses established already in the 16th century.

In the 17th and 18th centuries focused the attention of the glass blowers entirely on the shapes. Mirrors and chandeliers from Venice were so in demand that Louis xiv tryied to establish a competitor manufactory to avoid import expences.
Also in Bruges andin Bohemia, innovative factories were created.
They developed the technology of the engraving of glass and shortly thereafter invented the crystal.
In 1730, Giuseppe Briati founded in Venice a factory to imitate the bohemian crystal.
The results were disappointing, because the fine venetian crystal was not suitable for engraving and could not be sliced in faceted.

The change of the taste and competition from abroad decided the decline of glassmaking. During thr falling of the republic of Venicem it was almost completely down.
Only in the middle of 19th century it flourished again thanks to the undertakings of some old glassblower families (Barovier, Toso, Seguso, Salviati) and the setup of the glass museum again.

The museum is the only one of its kind in Italy, settled up in one of the largest palaces on the lagoon, the palazzo Giustinian.
It consists of three departments: the first show the history, egyptian and dalmatian pieces, the second presents glassy works of art created between the 15th and the 19th century, and the third – in a nearby building- is shown the modern and industrial production. All three are worth the visit, but the interesting rooms are certainly those of the second department, because they provide an overview of the evolution of the taste and the techniques.
Here there are working tools of the glassblowers shown and the different stages of production 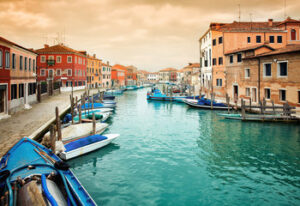 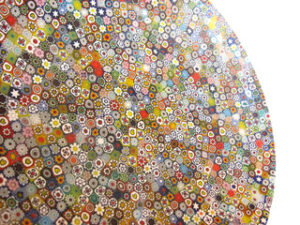 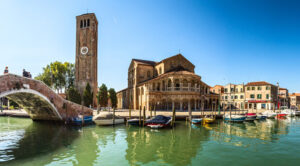 A group of islands

On the map you can see that city center approximately equal to the Venice. A smaller one island group is accessed from a main channel, that sometime is much wider than the Venice.

If you go to the “rio dei Vetrai”, the canal of the glassblower, follows, offers a beautiful view of middle age buildings.
They are a special type of building:, the glassworks.
They contained both the living area of the master, the workshop and the warehouse for raw materials.
Near this constructions you will see the casa degli Obizzi e dei Sodeci and the palazzetto Corner with his column row and gothic windows.

At the end of the fondamenta stands on the left is the church of san Pietro Martire.
Their renaissance colonnade is worth a break, as well as the paintings and the wooden carved altar, the episodes off depicting the life of John the Baptist. The facade palazzo da Mula faces canale degli Angeli. it combines byzantine, gothic and renaissance elements.
Beyond the palazzo Giustinian is the palazzo Trevisan, a solid structure in the palladian style with a once of frescoed cornice.

This church is not only the most beautiful building of the island, but also one of the oldest in the lagoon, and only her floor worth the way here.
The church was founded in the 7th century,consecrated acrated to Maria, but also to Donatus, when they brought here the rests from Kephallenia in 1125.
The byzantine interior looks like the basilica san Marco, the church is shaped by the influence of currents that came from the mainland, such as the romanesque art.